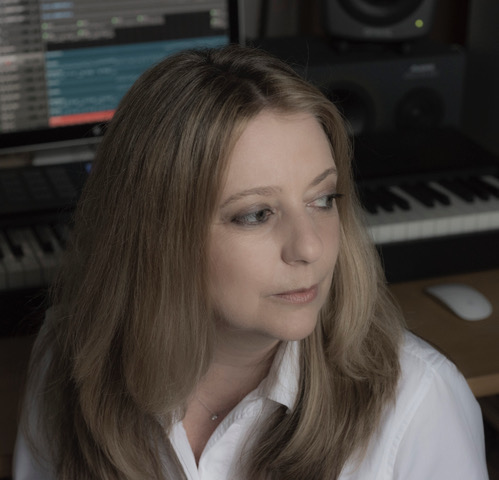 Marie-Anne Fischer’s composing career started in South Africa when she teamed up with a post-production sound engineer to write several hours of music for the SABC television, corporate videos and wildlife documentaries. After leaving South Africa, Marie-Anne initially spent 18 months in the USA and did an apprenticeship at Music Annex, a sound studio outside San Francisco and then moved to London, United Kingdom.

Marie-Anne has written music in a wide variety of genres, completing projects ranging from music for film, television and games. She has successfully collaborated with other composers and welcomes new challenges. Recent work includes scoring, ‘I am Belmaya’, an award winning feature documentary directed by Sue Carpenter and Belmaya Nepali. The soundtrack for ‘I Am Belmaya’ became part of Mark Kermode: ‘The Best Movie Music of 2021’ track list.

Her music has been published by ‘The Library of the Human Soul’, ‘Gothic Storm Music’, ‘Minim’, ’Lovely Music’ and ‘Synctracks’ spanning from cinematic, world, electronic, orchestral, contemporary, ambient to creating emotional pieces which have been recorded by live strings from the Royal Liverpool Philharmonic Orchestra and Vienna Session Orchestra. Her music has been placed and broadcast worldwide on Netflix, Disney Channel (FR), NBA TV, BBC, SABC, TF1, Canal+, The History Channel, CBS Drama, MTV, National Geographic and Discovery television Channels.

For several years Marie-Anne has been a member of the Sonokinetic and Soundiron team of composers and beta testers. She has scored a number of Sonokinetic’s promotional videos. She has written demos for Gothic Instruments, Sonicsmiths, RealiTone, Strezov Sampling and Cripto Cipher.

As a media composer, she is able to create music in many different genres, and is both a strength and source of personal enjoyment. She draws inspiration from a wide base of people, art, music, film and nature and reflects it back in her music. She completed a course in Media Music Composition and subsequently went on to complete a Diploma course in Cinematic Orchestration through ThinkSpace Education.

Marie-Anne believes that it is important to maintain a broad and strong network of music related recourses, all over the world, in order to be able to succeed with projects of all sizes. Currently Marie-Anne is Director of SCOREcast Global community, which affords her the opportunity to communicate and expand her knowledge. She is a voting member of PRS, and is an active member of WFTV and AWFC.

Marie-Anne is a Belgian composer working from her studio in Bruges. In her free time, Marie-Anne enjoys photography, film making, pottery throwing and long walks in nature. She is fluent in English, Dutch, Afrikaans and conversational French.